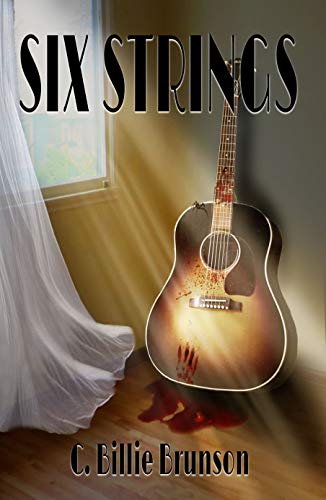 Carl Percival (Percy) VanNess inherits a guitar from his father. He’s intent on learning to play and wants to use it as a roadway to fame and riches. But this guitar is not as benign as it appears. In fact, the music produced when it is played incites anyone within earshot to murder whomever is in sight.

Troubles escalate when Carl lets his buddy Peyton borrow the guitar. Next, Mat, Peyton’s older brother, gets caught up in the same diabolical intrigues surrounding the guitar.

Only Stacey, Carl’s enduring sweetheart, is aware and seems immune to the Gibson’s evil persuasion. Is this due to some latent magic she holds within, dumb luck, or something else entirely?

Can she, with the help of her loyal Lab, Diva, convince her friends to let go of something they cherish before it tears their friendship apart? Might two Djinn token seekers who are after the guitar to fulfill their own agenda put the brakes on her efforts?

Name of character to be interviewed: Stacey Ingraham

Why was this character chosen for this interview?:

Stacey is the only one who thought this might be a fun thing to do so early on a Sunday morning.

Question 1: What do you like to do for fun and relaxation?

Answer: I like to go on nature walks with my dog Diva.In the summer I like to throw pool parties. Just because. I also really like playing scrabble with my dad, spa dates with my mom–we try to go twice a month–and reading romance novels.

Question 2: You always seem to hang out with the guys. Are you close to any girls your age?

Answer: Not really. There was Valerie. She was heavy like I used to be and so we kind of hung together for, you know, support against those who thought making fun was okay. But, then, she and her family moved away to Florida. Soon after that I met Carl. He didn’t care about me being chubby.

Question 3: What is your favorite dish for breakfast, lunch, and dinner?

Answer: Ever so often we like to go to The Breakfast House which is a fifteen minute drive into Phoenix. They serve Waffles Supreme with sausage and fruit on the side. Yum. For lunch, I always seem to want pizza but I usually have something like tuna on rye or a salad because I’m trying real hard not to be fat again. For dinner, I still sometimes crave the enchiladas, refried beans and rice that my dad’s ex-sister-in-law used to bring us sometimes. My mom sometimes tries making it for me ’cause she knows I much I liked it. But she don’t cook it how Louisa used to. Sorry, mom.

Question 4: If you could go on an all-expenses-paid trip to anyplace in the world where would that be?

Answer: Hmmm…
That’s a tough one.
Hmmm. Maybe Italy, I guess. People from way back on both my mom and dad’s side are buried there. It might be interesting to see where they lived and visit the cemeteries where they’re laid to rest. Cemeteries are really interesting places, to me.

Question 5: Where do you see yourself five or ten years from now?

Answer: Good question. Ask me that after I figure out the the purpose of those items I discovered in that strange pocket of Ruen’s smock. Something tells me that, once I do, my future is not going to be anything like I could imagine.

This character interview was submitted by the author C Billie Brunson.

If you have enjoyed reading this character interview, please purchase a copy of the book via your favourite book retailer or from Amazon