Today’s Sunday Snippet is an excerpt from the Fantasy, Mythology novel Underperforming Underworld by Andrew Harrowell. It has a target audience age range of 18+ especially as it does contain some swear words. 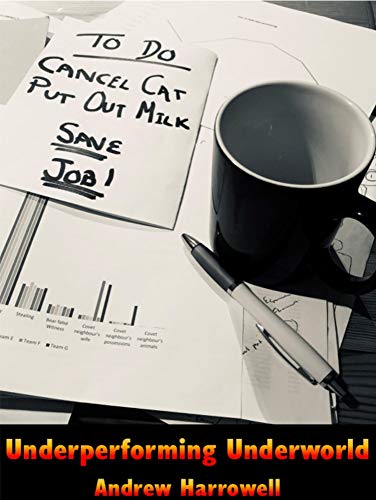 Minos, Final Judge of Souls, is having a tough time.

Not only is he fed up with all the paperwork and meetings that go with running his department in the Underworld, but now the whole operation is facing a financial crisis (that’s so bad it may mean that the demons can’t have a sports package on the TV in their mess room anymore).

Much to the demi–god’s dismay his boss, Hades, brings in a pair of mortal management consultants to fix the business, and it’s not long before panic is spreading through the demonic workforce.

And then things take an ungodly turn for the worse…

Minos is going to have to deal with a strange assortment of individuals and earthly situations, if he has any chance of saving the Underworld as he knows it.

Of course, having an unstaffed reception desk wasn’t the greatest issue that Kevin Branaghan had spotted since he and his manager, Sandra Sparkes, had arrived in the Underworld, but it was definitely worth noting.
What is the point, the bespectacled man mused, of having a waiting area outside your offices if you don’t have someone there to greet guests?

Although Branaghan had been in awe of the palace that was home to both Hades, Ruler of the Underworld, and his operation of life-after-death, it didn’t change the fact they had been stood in the entrance to the workspace for almost seven minutes, with no sign of a soul (or demon or demi-god, for that matter). Even the small creature that had escorted them through the grand entrance hall, up the imposing staircase, and along the winding corridors, dotted with a multitude of ceremonial items, had scampered away as fast as his little trotters could carry him. The pair of still-living mortals (a status that made them the odd ones out in the kingdom) might well have been engaged by the Underworld on a fixed ‘save our company’ rate, avoiding Schneider, Schneider & Patterson’s billable hours options, but it still didn’t give Hades an excuse for keeping them waiting. It’s highly inefficient snuffed Branaghan. He could not abide time wasting in his personal life and certainly not in his role as a Tactical Analyst.

Trying not to think about some of the strange sights he’d seen on the journey across the land – including the hulking demons kicking and tossing men between them as they played American football (all because the individuals involved hadn’t honoured the Sabbath, he’d been told) – Branaghan swiftly pulled his pocket notebook from his pocket (the best place to keep it, as far as he was concerned) and added the timekeeping issue to his ever-growing list of business basics that were being missed. He grinned ever so slightly as he carefully scribbled down his thoughts, knowing that his boss would eventually delight in hearing them. For the moment the blonde bombshell was focused on her phone, tapping away with the speed of an overexcited dancer.

Branaghan adjusted his thick glasses and then returned his pen to hover over his notebook, not daring to put it away just yet. As the smell of sulphur once more welled up in his nose, his nostrils twitching and flaring, his mind reviewed what he’d seen since arriving in the strange land (which he hadn’t known existed a few days ago – well not with any certainty anyway), checking there was nothing else he had missed.

The cowboy who had greeted them on the island, where they had first appeared in the kingdom, had been very odd. What the Wild West had to do with death the Analyst did not know. The welcome had been less than impressive, although Branaghan sensed Sparkes had appreciated the flattery the demi-god had served up to her.

But then that was usual for the consultant.

Sparkes definitely didn’t mind extra attention from the clients. Branaghan had seen that, and been caught in the fall out, on more than one occasion. At least the compliments from the Stetson-toting deity had pulled Sparkes’ eyes up from her phone for a few minutes. The Analyst was always amazed at how the woman could focus on the project she was working on, and keep her fingers in everything else that was going on within the company. Whether it was wanted or not.

The experienced business fixer was well known for sticking her nose into other assignments. The lads in the office, many of whom had shared hushed tales of sexual encounters with the woman (much to Branaghan’s distaste), often bemoaned how the blonde would poke around in their work, weighing in whenever she could, just to ensure she was included in the final credit. Sparkes was infamous amongst the junior staff for always being seen in the right places.
The only thing longer than the list of Sparkes’ sexual conquests was the hours she put in for the firm. The woman lived to work and, unlike Branaghan, was not concerned with sending emails or making calls at any time of the evening. The Analyst often regretted giving his boss his personal number – many a miniature aircraft model had been disturbed by her insistence that he logged into his laptop and did something work related (which, in Branaghan’s opinion, often could have waited until the morning). He shuddered every time he caught sight of the scuffed transfers on the tail of his beloved 1:10 scale C-130 Hercules, one of the severest casualties of Sparkes’ late evening toils.

Branaghan pulled out a handkerchief, the molten smell of the kingdom irritating his nostril hairs. At the same moment, the heavy thumping, which the Analyst had been told were trolls dishing out an eternity of punishments, grew in volume, the low clangs jarring the young man’s fillings. Surprisingly, neither the loud nose blowing or toiling of damnation pulled Sparkes away from her emails.

This is really what happens after you die, Branaghan reflected, wondering what sort of demonic torture would be waiting for him when his life was eventually up. He’d always considered himself a good person, but, now, stood in the home of life-after-death, he couldn’t help but question if he could have lived a better life. Done more for others.
Before he could get too bogged down reflecting on exactly how many other kids he hadn’t let borrow his pens, the Analyst’s keen sense of duty reminded him that he was at work and should be focused on his job. He certainly wouldn’t have tolerated daydreaming if he was billing for his time right now. That would be wrong – and he didn’t need to push himself any closer to an eternity with the trolls, or any of the other strange looking demons he’d spotted in the Underworld so far.

Sensing there was still no opportunity for conversation with Sparkes, Branaghan turned his energies on the notes he’d already made. He meticulously moved his eyes over the carefully constructed words, neatly set out, with key words underlined.

The first point he had recorded was a recommendation that the Underworld improved their signage when a soul arrived.

His mind corrected him before he went too far down the lines of his last project. He pulled his pen across the note, carefully expunging it from any further consideration.

This task was not the same as his previous engagement – it was not increasing revenue for a well-known, but struggling, takeaway firm. He did not need to unpack his ‘The Four P’s for Effective Marketing’ presentation this time round.

This was a cost reduction exercise.

Branaghan and Sparkes had been employed to assess where savings could be made, or new revenue streams added to the Underworld. The Analyst just hoped that Hades understood that was what was needed too.

As was always the case for employees of Schneider, Schneider & Patterson, they would begin their work by reassuring the Ruler (just a different way of saying Managing Director or CEO, after all) that he’d taken the most important step in dealing with the Underworld’s problem – admitting it and engaging them to come in to help.
Branaghan just hoped that the rest of Hades’ team would understand what was going on. Upper management resistance was almost always the trickiest obstacle to overcome. No one liked being told their department was inefficient, that they needed to merge with another or that simple things like rotas stacked with three days of work followed by four days off were plain crazy (as in the case of the Underworld’s Kers – whatever they are…).

Senior managers could often be the hardest blockers to a successful turnaround project, with the consultant team often than having to navigate egos, interpersonal politics and constant cries of ‘we’ve always done it that way’. Although that wasn’t really Branaghan’s concern. Sparkes focused on the personalities involved and leading the charge to convince people to implement the plans put forward. Branaghan was just there to review the operations and crunch the numbers.

It was just more efficient if people got behind the plans, rather than resisting.
Branaghan had seen it many times before – anytime someone waged a war against change, it often just dragged out the work, slowed the recovery, and, ultimately, should redundancies be necessary, it put the individual squarely in the firing line.

And in a situation where an organisation is losing money, redundancies are inevitable.
As the thought swung across Branaghan’s mind, and he considered if the unseen receptionist had already been let go, Sparkes started to stir, her eyes intermittently coming up from her device, flicking keenly around the dull room. The Analyst sensed it wouldn’t be long before she turned her full attention to the immense task at hand.
Just before she could express her own annoyance about how long they had been waiting, a voice that was like the thunder clap that tells you the storm is directly overhead, resonated through the room.

“Where are those damn mortals? If we’re going to do this we might as well get on with it.”
A dark shadow slid out of one the nearby offices, barrelling across the floor and up the opposite wall. The god that the silhouette was attached to was more intimidating than Branaghan could ever have imagined, and he couldn’t help but gulp loudly.
Oh hell!

If you have enjoyed reading this excerpt from Underperforming Underworld by Andrew Harrowell, please consider supporting the author by buying a copy of the book.

This excerpt was provided by the author for publication on this blog.