Some guests on my podcast support the running costs of the show by paying a booking fee.

Just the other day I saw a post on Facebook in a local mummy group I’m in, asking for opinions about screen time limits for children. There were a lot of comments but it seemed that the majority vote was that it was not ideal for children under the age of 8 to have access to technology like smartphones and ipads and even then it should be limited. Well, you may very well be surprised to find out that my daughter has had her very own tablet since she was a baby. Now, before you go calling child services saying that I am the worst mother in all of humankind, here’s how it all panned out and why I do not limit screen time for my daughter.

I had an Amazon Kindle before my daughter was born

How your young child behaves is a reflection of you!

Whilst we were in Nigeria, my daughter had considerably more outdoor space than we could ever imagine having access to in the UK. This consequently meant that even my daughter on her own did not want to just sit indoors. As a family, the adults didn’t just have their eyes glued to screens, we socialised with each other. Consequently, my daughter did not need to be invited to take part. She was (and still is) naturally curious to find out what everyone else was up to with all the different household activities we got up to.

As there are peaks and troughs in everything in life, so also were there times when she naturally gravitated towards her Kindle but the majority of the time, my daughter opted to follow everyone else in whatever it was we were doing.

Back in the UK, my daughter still reflects my behaviour

I have seen a lot of memes were they say that you should enjoy your children as they are not young for very long. I try to hold on to that thought, especially as I see how my daughter attaching to me has helped her develop.

Making the decision to be a work from home parent, has possibly been one of the best decisions I made for my daughter. I feel that by simply watching me, it has helped her development. That said, whilst my laptop is open every single minute of the day, I do make sure that I do things with my daughter when she is not at nursery.

I empowered my daughter by giving her her own chores

Over the summer, my daughter’s job was to water our flower pots and every so often, we weeded the garden together. Now that it’s winter and my daughter is a little bit older (she just turned 4), her latest chore is to do the dishes.

Maybe it’s her own personality or maybe it is the benefit of being in a single adult household, but my daughter has been showing initiative and been asking to help out with the cooking. At this stage, I let her watch what I am doing but allow her to do simple things like butter bread or add the ingredients to pancake batter.

I encourage my daughter to do the things that she likes or shows interest in, whilst giving her a sense of responsibility and adding value to the household. This way, screen time doesn’t even come into the equation at certain times.

If given the choice, would your child choose screen time over making homemade ice-cream?

Thus, I have not intentionally set out to limit screen time

We have simply continued with our normal activities of daily living.

When it is breakfast time, you go to the kitchen and you help out! When it is time to tidy up, you tidy up!

I have seen some parents comment online that they didn’t give birth to their own children for them to do housework and that is perfectly fine, each to their own. Personally, I want my daughter to grow up to be a capable young woman, a young woman who is able to look after herself effectively and efficiently without depending on someone else. The only way I can achieve that is by showing her how to do things and letting her attempt to do things by herself and from an early age. You know the saying practice makes perfect!

A typical day for us is (in winter) … 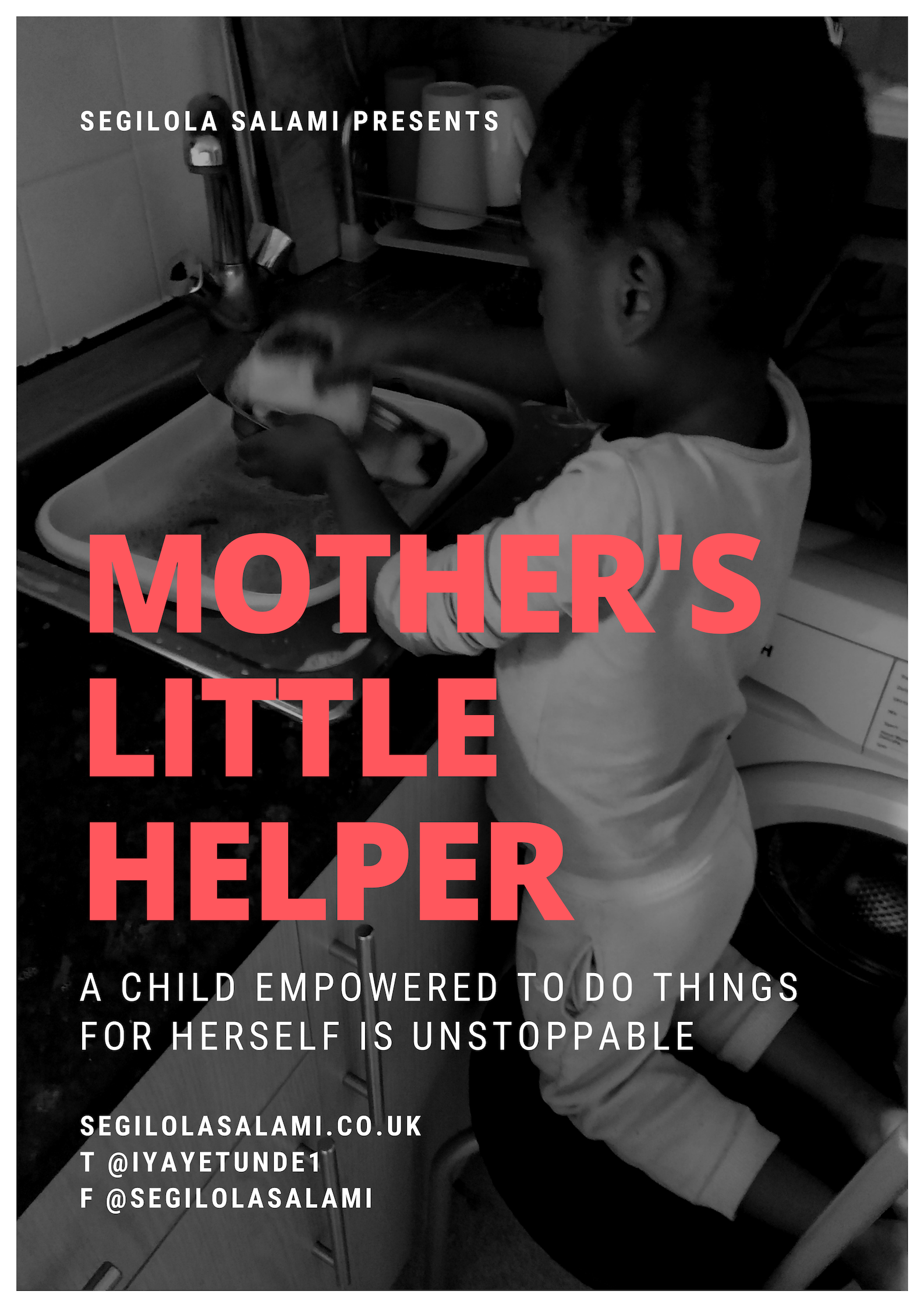 My daughter knows that she has a tablet and can use it at any time she wants to but 99% of the time she doesn’t use it. I’m assuming that my behaviour has contributed to this. I have never simply just given it to her as a way to prevent her from bothering me. Even when I am working my daughter knows that she is more than welcome to come to me at any time and she does do it. In fact, I have encouraged her to join me when I am recording my podcast The Segilola Salami Show. Plus, we have regular conversations about what’s going on in the cartoons that she watches.

As well as Super Why

By me being there and being open to having regular social conversations, I feel that this has helped my daughter’s mental development. Sometimes when she wants to make a point, she would go mummy, remember what Tiger said? I can relate because I listened when she was watching even when I am attempting to do work.

We do not have live TV

I believe that live TV is a very dated service and so our TV is not set up to receive signals from local TV stations and neither do we have satellite subscriptions. Rather we have a Now TV box that allows us to connect YouTube to our TV and that meets all our viewing needs effectively.

My daughter understands that the TV needs to be shared. She watches educational cartoons, I watch Yoruba movies. Playing Yoruba movies also enables my daughter to pick up on the Yoruba language. She’s not going to get that outside of the home in the UK.

After a long time of not using her Kindle, totally my daughter’s choice, she decided to use it recently. The Kindle is set to a child’s account for safety, so I am happy with my daughter using it whenever she wants. Whenever she’s on it, I not just listen to hear what’s playing but every now and then I look over her shoulder to see what’s playing.

With her free reign, I saw that my daughter had discovered that that Cbeebies channel had games for kids and she picked up a game that she knew how to play, a Go Jetters game. I was truly amazed! I did not know that the Cbeebies did games for kids but was doubly amazed that my then 3yo was able to discover this for herself. We talked through the game and why she wasn’t performing well. I explained what the idea behind the particular game was.

Eye to hand coordination has developed

One of the Go Jetters game reminded me of the Super Mario games. The player needed to jump to win some coins. Now my 4yo daughter can guess when she needs to press for her game character to jump to be in time to catch the coins whilst running. Maybe this is something all kids know but considering that I am not a games person myself and my daughter has not seen anyone else doing this, I feel proud about this little achievement. I believe that it takes a lot of brain power to do several things at the same time:

I play games on my phone to distract me

Actually not a lot of games, just candy crush and bejewelled as I need it to distract me from my work. The distraction actually helps me focus better. My daughter noticed when I started playing games on my phone and for this reason she asks me for my phone every so often too. She’s currently only allowed to play bejewelled as I feel that candy crush is a bit too advanced for her.

As you advance up the levels on bejewelled, you have to aim your ball on the wall to hit the balls outside of its straight reach. I was AMAZED the first time my then 3yo did this. I used to think it was too advanced for her and it may take a very long time for her to be able to do it.

That said, you need to do what suits you and your family, especially with regards to screen time

I do not agree with the idea of setting out strict limits for the sake of setting limits. I believe that rather there should be a time and a place for everything that flows naturally.

Someone once asked me to get my daughter a TV in her bedroom. My answer was a firm no! Bedtime is for sleeping, not for watching TV.

There’s a place and time for everything that naturally occurs as you progress through your day. Because of this, I have never needed to set limits to screen time in my household. Maybe this might change in future, maybe it might not.

Would you limit screen time for your own children? How does a typical day pan out for your family? Please leave a comment below