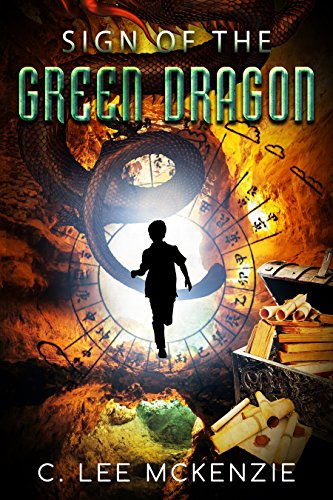 After six months in a new school, Sam’s finally fitting in. He’s the one kid with enough talent to hit the winning home run and bring the baseball trophy back to Haggarty Elementary. But Sam’s guardian is shipping him off to boarding school before that can happen.

When teammates, Joey and Roger, hear his bad news, they plot to hide him until the big game. Their secret cave is a perfect place until an earthquake shatters a wall and reveals a wooden chest with a red-eyed dragon carved into its top. Inside, a bony hand clutches a map with a note, promising treasure.

With Joey and Roger, Sam sets off to track down the clues and hopefully discover treasure. When some puzzle pieces start to make sense, the boys become lost in a labyrinth of underground tunnels, trapped by dangerous thieves and sealed inside an airless tomb.

Sign of the Green Dragon gets a high five for fantasy, fun and some fearsome adventure. If you like intrepid would-be knights on impossible and dangerous quests, you’ll love this story. As one reader says, this book, “has more twists than a dragon’s tail.”

Buy now to jump into the adventure.

C. Lee McKenzie has a background in Linguistics and Inter-Cultural Communication. Her greatest passion is writing for young readers. Sign of the Green Dragon is her third Middle Grade novel. Alligators Overhead and the sequel, The Great Time Lock Disaster were her first two. She has traditionally published four young adult novels: Sliding on the Edge, The Princess of Las Pulgas, Double Negative and Sudden Secrets.

The author recommends this book for readers who enjoy stories for young readers. What do you think of the book? Please leave a comment below 😀

Happy new year everyone, see you in 2017