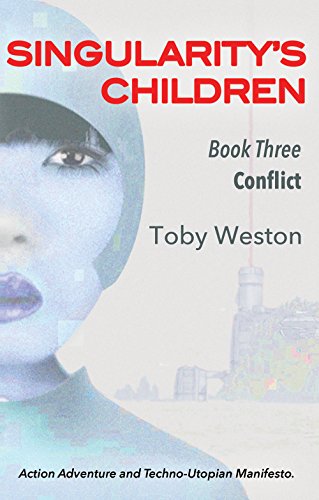 Action Adventure and Techno-Utopian Manifesto. Conflict is compelling and provocative–a romp through the alien landscape of our not-so-distant future.

The balance is shifting. The Forward Coalition is losing relevance, it knows the world is slipping through its fingers. But Nebulous and the Kin are still too weak to confront the old bulls, who, cornered and confused, are at their most deadly. Can the torrent of fantastic technologies emerging from the Klan’s Fabs bring about utopia as the optimists claim, or only speed the planet’s inevitable appointment with annihilation?

Cold wars are growing hot as governments lash out at what they don’t understand. Plutocrats and blue-eyed idealists face off across a planet bristling with micro-nukes, chthonic bio-machines, and weaponised hallucinations. Mankind’s million-year run will finally take it to the brink of an abyss with oceans of darkness awaiting above and below…The fast-paced action ricochets the reader between neon-stained riots of urban flesh and idyllic tropical islands, where humans and their BugNet companions have built a pan-species utopia.

The Singularity’s Children Series:
As the Third Millennium dawns, the world is slipping beyond human comprehension. Citizens are bewildered and angry; kept in line only by vast programs of computer-driven propaganda. The planet’s leaders are in Denial, clinging to the illusions of an idealised past, unable to move beyond corporate greed and political charade. But an emerging movement of techno-optimists can see post-scarcity utopias glittering on the horizon and have started building a collaborative future for all of Singularity’s Children…

War is coming and Conflict crackles with the energy of an approaching storm.

The Snippet From Chapter 18 – Idiot Buttons.

Girls and couples strolled along the beach in front of Ben’s table, while robotic turtles clambered out of the Caribbean and pretended to nest on the beach below the veranda. The moon reflected from the faces of waves out to sea. Inshore, it backlit the baby breakers wobbling up the sand; collapsing, sending rhythmic, soothing sounds into the moist and salty air.

Sex—that was what this was all about, Ben thought.

“Yes, Mr Baphmet. I understand. But very truly, I am not believing it was intended to offend. You see, the first principle of good design is simplicity…” Girish continued, while Ben’s mind continued to wander. He had forgotten exactly what he had been saying. Against his better judgement, he went with the suggestions that the Sage—his Sage—was prompting in his peripheral vision.

“You have to step it up and become an example to the other juniors,” Ben read out loud. “We need you to show them how to behave professionally. This is very important, err, Girish.” He repeated the words from his private auto-prompt.

“Yes, sir, you are right. And, truly, I did understand the first time,” Girish said with a tiny head wobble.

“So, start acting like somebody with responsibility! Be a fucking leader, okay?”

“Off you go then. Piss off. Try harder.” Ben was looking past the nervous programmer’s head, observing two female tourists at another table. They were laughing delightfully. Ben wanted to have sex with them.

“Yes, sir, thank you, sir.” Girish stood and held out his hand. Ben looked at it for a short second, then made a shooing motion, adding an accompanying buzzing noise to emphasise the conversation was now over and that Girish was now intruding on Ben’s personal time.

The junior was not entirely clear why he had just been flown halfway around the world to have this bizarre conversation. If he hadn’t known better—that Ben was a member of the firm’s executive council, the chairman’s son, and a major shareholder—he might have thought this senior leader was more interested in the two Chinese girls at the next table than discussing the establishment of adequate processes and QA gates so as to avoid a repeat of the recent unapproved screens issue.

Girish himself had only been with the company a few months. He was now the only internal employee left on the project, since most of the team had decided to move to Swansea and take up challenges elsewhere in the BHJ family. He had been worried they were going to fire him; there had, after all, been one hell of a stink. But now it looked like he was being promoted instead.

What a funny world, he thought to himself cheerfully as he wandered back to the auto which would take him to the airport, where he would catch a twelve-hour commercial flight back to his cubicle farm.

If you enjoyed reading today’s Sunday Snippet from the Science Fiction novel Conflict, Book Three of Singularity’s Children by Toby Weston, you can purchase your own copy of the book on Amazon or via your favourite book retailer. Please leave a comment below, I think the author would love to know what you think of his book.