It’s been a while since I shared a book on my Sunday Snippet series. Life got in the way 🙁 I’m back (for) now. Today’s Sunday Snippet is from the book Gamble’s Run by David F. Gray. The preview to Gambles Run is from chapter one.

What is the book about?

Reeling from the tragic loss of his infant daughter Molly and the disappearance of his wife Melody, Garrett Webb begins a journey that will ultimately bring him to Gamble’s Run, a long-abandoned canal hidden deep in central Florida.

If he has any hope of finding his wife, he must penetrate the mysteries surrounding the canal and confront the evil that has festered there for untold centuries.

Webb will make deadly enemies, but will also gain steadfast friends and allies, and together they will confront a power that exists beyond time and space.

Unearthly forces clash in ancient conflict with a single question hanging in the balance: What dwells beneath the forgotten waters of Gamble’s Run? 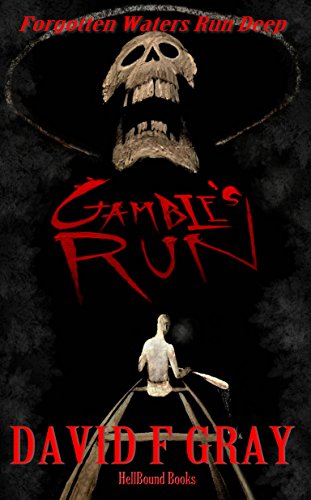 Garrett Webb awoke with a start, his heart pounding. He wiped away the thin sheen of sweat that covered his forehead as he struggled to regain full awareness. The nightmare that had been tormenting him vanished in a dark puff of dream smoke, leaving him with nothing more than a fading impression of being slowly smothered.

The only light came from the glowing red numbers of the small clock perched on the nightstand beside his queen-sized bed. He barely had time to see that it was 4:05 a.m. before they winked out. An instant later, his bed lurched sideways and slammed into the wall. His left shoulder struck the wall at an awkward angle, causing him to cry out in both pain and shock. Instinctively, he reached out for the woman sleeping next to him.

“Mel? MEL!” An instant later, his wife Melody cried out as she too was brutally dragged back into consciousness. Her arm flailed out, slapping him hard on his stomach. He was shirtless, and her fingernails scraped along his ribs, leaving four thin, bloody scratches. The bed lurched again.

“MOLLY,” she screamed. Of course her first thought was for their ten-month-old daughter. On cue, Molly started crying. Husband and wife struggled to get out of bed, but suddenly the floor tilted. The bed slid along the wall, away from Molly’s bedroom, and stopped under the window that overlooked the lake just outside their petite home. The lake had dried up during the long drought that gripped central Florida, and all that was left was a hard, cracked bed.

“MOLLY,” screamed Melody again. The house answered them with another groan, and suddenly the window shattered. Shards of glass pummeled them. If they had been looking up, they would have been blinded. As it was, they sustained dozens of painful, shallow cuts.

“Garrett! What’s happening?” Garrett opened his mouth to say that he had no idea, but suddenly a wall of dirt followed the glass. He covered his eyes and mouth and rolled sideways as the dirt piled onto the bed. Melody screamed again. She scrambled off the bed and fell to the floor. Then she began to crawl toward the bedroom door.

“MOLLY!” Melody’s only thought now was for her daughter. In the next bedroom, Molly’s cries became screams. The tiny wood frame house shook as dirt continued to pour through the bedroom window.

We are going to die, thought Garrett. For a moment, he was more amazed than afraid. How could a perfectly normal night transform into this kind of insanity? Melody had put Molly down early. He had ordered pizza, and the two of them had eaten while they watched television. Afterward, there had been long, slow lovemaking.

Garrett was not due at work until nine the next morning, and they had stayed up late, talking about their plans for their new life. Both had been born and raised in Kentucky, but Gainesville was now their home. They were rapidly falling in love with the Florida city. It had been a plain and simple night…the best kind of night.

“No.” He spat out the word, along with a mouthful of dirt. “We are not going to die like this.” He was two-thirds right.

Melody was almost to the door, but it was an uphill climb. She scrambled against the hard wood floor until she reached the door frame. She grabbed it and held tight. Molly’s screams were frantic now. Garrett knew that they had seconds to get to her. He crab crawled across the bed. He was wearing only night shorts, and shards of glass sliced into his hands, knees and feet. He ignored the stabbing pain and lunged forward, falling to the floor. Something ripped deep inside his calf. He screamed but kept moving forward.

How to purchase a copy of Gamble’s Run, By David F. Gray

If you liked what you have read so far, you can read the rest of the story by purchasing your own copy via your favourite retailer. To make it easier for you, you can click on any of the links below to purchase a copy of the book on Amazon. The author would really love your support.

What are your thoughts about this preview to Gambles Run? Please leave a comment below.

PS: Please note that this preview to Gambles Run was provided by the author David F. Gray.