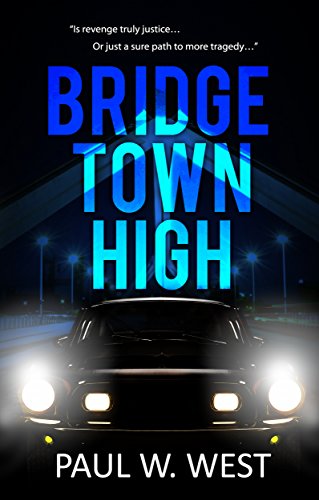 Seventeen year old Mark Wilkerson has no memory of the fiery crash that killed his family on the Carquinez Bridge… Living with his grandmother and burdened with guilt, Mark vows to find the hit-and-run driver and take his revenge. The only detail he remembers is round taillights swerving in front of his family’s car, and he’s shocked when he notices the car of the high school’s bully, Jeff Marino, has identical taillights—and a suspicious dent. Now he wants revenge more than ever… Jeff believes Mark is an anti-Vietnam War activist like his cousin Gary—and despises him for it. To make matters worse, when Jeff’s girlfriend Genie Lombardi dumps him for Mark, it kicks Jeff’s hatred for him to a dangerous new level. Lies and threats escalate, until drugs and a shocking death send Jeff over the edge, and his campaign to get Genie back any way he can turns violent. When Mark’s memory begins to return, it leads to a terrifying confrontation. Will he finally prove the identity of the guilty driver? Or will he and Genie become one more tragedy associated with the Carquinez Bridge?

This book is worth the read and stays true to the young adult genre with no profanity or sexual content. Some of the characters use alcohol and drugs and there is some violence, but no more than is seen in any television program.

You can get a copy of Bridgetown High on Amazon

Paul West is a freelance writer and novelist. Born and raised in the San Francisco Bay Area, Paul claims to be a “Prune Picker,” though he now makes his home in Taylorsville, Utah.

The rustic San Francisco Bay Area countryside, the quaint small town in which he grew up, and the colorful people who once lived there, have all teamed to fertilize his ever-churning mind with stories that are yearning to be told.

From his earliest days in high school, his English teachers saw some raw writing ability in him, both for fiction and non-fiction, and urged him to pursue his dream of being a writer. In college his creative writing professors also encouraged him to mold his ability into a talent.

After settling on a career as an environmental biologist, where he’s written numerous technical publications, the stories swarming through his mind kept crying to get out. So Paul began writing fiction, but only as a hobby at first. He has recently finished his first novel, BRIDGETOWN HIGH, and is working on his second. Paul intends to keep letting his stories out through future novels.

Paul is the originator and former moderator of a private critique known as “The Writer’s Pen,” a sub forum in the “Authors by Design” web site (now defunct). He is also a member of Query Tracker forum; and Children’s Writer’s & Illustrator’s forum; Utah Children’s Writers forum; among others. In addition to his writing, he and his wife, enjoy spending time with their four children and thirteen grandchildren, gardening, reading, traveling, and researching their family history.

What do you think of Bridgetown High? Please leave a comment below. There’s love in sharing, so please click on one of the social icons to share this post on Bridgetown High by Paul W. West with your network.