Today’s Sunday Snippet is from the book Do You Want to See the Videos by Phil Sageser. 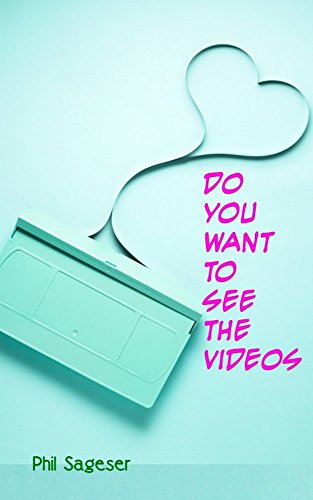 About Do You Want to See the Videos

Do You Want to See the Videos is a psychological thriller about a young woman who is trying to make sense out of the facts of her life. But facts without a story are meaningless. While she has lived that story, she has never told it. As she tells her story to her therapist, she begins to decide what it means and so becomes, not merely a character in her story, but its author.

They were already running in his head. And that made everything complicated enough. There certainly was a part of him that was ready to be graphically fascinated, but clearly that would not be helpful. The temptation was to be seduced by the images, to imagine that what you saw were “the facts,” that “the facts,” as Joe Friday, of Dragnet fame, used to suggest, were all that were important. But even Joe Friday wanted “just the facts, Mam” because he needed to be the one who figured out what “the facts” meant.

What did it mean that she had not been the one to call for an appointment? Unless the appointment was being made for a child, he always asked that the person he would be seeing call before the appointment was finalized. And when he first met her, there was some reason to think of her as a child. She was tiny, so slender as to leave him wondering if he were dealing with an eating disorder. It was hard to tell how old she was by just looking, but the sheet he had everyone fill out said that she was 23. If he’d had to guess, he might have said 19, but he’d seen 13 year olds who looked a lot more mature.

He had learned to pay attention to how old a client “felt.” And it felt like she was four, going on eighty-four. Like she’d seen it all and none of it made any sense.

Who was his client here? He had to keep reminding himself that she was his client. Not her mother-in-law, who had first called to set up an appointment and who was paying his fee. Or did she still qualify as her mother-in-law since the divorce? Or had she ever, technically, been her mother-in-law, since her ex-husband had been adopted? He guessed she had been “in-law,” regardless of the biology.
Certainly not the ex, who was in prison, nor the lawyers who were asking if he wanted to see the videos. It sounded as if those videos had provided private viewing for a variety of people beyond what might have been necessary to determine their content and value as evidence. The bounds of “confidentiality” were clearly being pushed in all sorts of directions. Of course, the fact that he was even talking to these people was an indication of that.

“We’ve got a couple of boxes of them. Once we’d seen them, it seemed like a pretty open and shut case.”
It wasn’t like he hadn’t played a variety of roles. He had been involved in hundreds of investigations as part of a team who provided a “walk-in clinic” at the Family Court in Miami. In cases where abuse or neglect was alleged, everyone who showed up at court for the initial appearance was sent down to be interviewed and given a battery of psychological tests by the team and a report, with recommendations, was sent up to the “Grand Master” who was handling the case. Not infrequently, he would be called up to testify as an “expert witness” when the family returned to court. The team’s recommendations were typically endorsed by the Court, but the therapy, which was always a part of what they recommended, rarely occurred because there was no money to meet that need.

In those cases, he was clearly an investigator. If there was ever any therapy that would get done, someone else would have to do that. But when he was the therapist, the focus was very different. While “the facts” were not irrelevant for the therapist, his primary aim in doing therapy was to help the client change the meaning of the facts. As the bumper sticker, which seemed to be everywhere, said: “Shit Happens.” He had gotten one made for the other side of his bumper that said: “The Trick is to Use it for Fertilizer.” As he pointed out to clients regularly, you had choices about what you did with the facts. You could wallow in them, or throw them, or you could make something grow out of them. It didn’t change what they were – they still stunk – but you got to decide what they would mean for your life.

His role had gotten blurred here. Yes, he was her therapist, but here he was talking with others about the “facts.” It was with her permission, indeed, at her request, so he wasn’t breaking confidentiality. But looking at the videos, nevertheless, just felt wrong.

The “mother-in-law” hadn’t given him any indication of what was going on, only that she and her husband would be paying for the therapy. And it had taken a while before it became very clear what her therapy would be about. That wasn’t unusual. When he was supervising “baby therapists,” as his wife called them, he often told the story of his own experience with one of his first clients.

He had been doing an Internship at an Elementary School and, because he was a still a student himself, they hadn’t been willing to tell him much about one of the boys they assigned him. All he really knew was that the boy’s father was in jail for something to do with drugs. He spent his first “session” following the fifth grader all over the school trying to persuade him to come into his “office” – the audio-visual closet he’d been allowed to use. From then on, the boy was quite willing to come into his “office,” but all he would do was draw trucks.

For six months, the boy never said a word. He drew trucks. In a very stylized manner. Using a ruler. Always pretty much the same. And then, when the twenty minute “session” was over, he wouldn’t even leave the drawings for his “therapist.” He would wad them up and throw them away in the covered trash can down the hall.

So the aspiring therapist didn’t even have the drawings of trucks to show to his supervisor when he complained to her that this was “the biggest waste of time” he could imagine. “You’re doing fine,” she’d say. “Keep it up.” He would try to find things to say to the boy as he drew his trucks – “Nice truck,” “You really are good at that,” “Could you teach me how to draw trucks like that?” The boy wouldn’t even look at him and he felt like an idiot.

The one other thing the boy would sometimes do was a kind of fancy lettering and one day he wrote his name in this fancy way, ending his name with a “Jr.” “Oh,” he commented, “you have the same name as your father.” And with that, the boy looked up at him and then began drawing – now free hand – what looked like it might be a drug bust. “Looks like a drug bust,” he said and the boy took another piece of paper and began drawing a courtroom scene. He’d obviously been in a courtroom. All the people were in the right places. And when he finished that, he drew a picture of a building with bars on all the windows. There was a figure looking out of one of the top windows and another figure standing on the sidewalk down below. “Looks like there’s somebody in jail,” he said, as the boy looked up at him for the first time. Then the boy left the drawings lying neatly on the table as he went back to his class. Finally, he had something to show to his supervisor. He wondered where the therapy might go next.

The next week the boy drew trucks. But a couple of weeks later, the boy’s teacher stopped him when he came to pick him up at class. “I don’t know what you’ve been doing with him,” she said, “but the last few weeks, he’s been a changed boy! Keep it up!”

He’d learned something, not just about doing play therapy with non-verbal boys, but about working with clients in general. You might feel like something real was going on when clients began talking about their lives from the start, but often they were really just “drawing trucks” while they felt you out until they could begin to trust you. It was the relationship that was most important if anything really helpful was to happen and this was especially the case when the client had real experience with what betrayal was about.

***
Hope you enjoyed the snippet from Do You Want to See the Videos by Phil Sageser? It was provided by the author. If you would like to read the rest of the book, you can get your copy on Amazon.