Today’s Sunday Snippet is from Running Is Cheaper Than Therapy: A Journey Back to Wholeness by Ouida L. Brown. The book is about the author’s life after losing her beloved mother to breast cancer. This snippet was provided by the author for your reading pleasure. 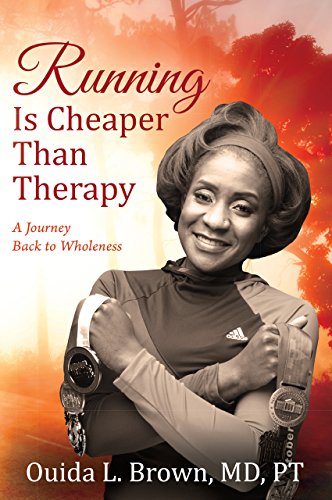 Chapter 1 of Running Is Cheaper Than Therapy: A Journey Back to Wholeness

The year was 2008. I was about to start my career as an
orthopaedic surgeon. Graduation dinner and yearly birthday
celebrations were already planned. This year it would be
Jamaica. I always went way out on my birthday. I considered
it a personal holiday. The plan was to celebrate, go home to
see my family, and then start my new job. I could see the light
at the end of the tunnel.

September came, and I was getting ready to go home to
Mississippi. I knew my mother would be so happy. Her
birthday had just passed. I could spend some quality time
with her. I had always felt guilty because I hardly ever went
home. I was an orthopaedic resident, and free time was a
luxury. I was in the hair salon when my cell phone rings,
which I usually don’t answer, but I did that day. It was the
hospital. I was shocked. I could barely hear. There is always
a lot of noise in hair salons. It was a nurse on the phone;
she said my mother was in the hospital in Jackson, MS. She
had gotten sick the night before and they had to send her to
Jackson to Baptist Hospital for some tests. While I was on the
phone with the nurse, my mom became lethargic and they
were about to send her to the intensive care unit (ICU).

I was worried. My mother was a breast cancer survivor. She
was a fighter and had battled cancer for seven years. She
had to have a mastectomy, chemotherapy, and radiation. She
never let it touch her spirit. She also loved me, and never
wanted me to worry about her. This felt different, but I was
hopeful, and I believed that no matter what, God could heal
her in spite of the fact that she had Stage 4 cancer. I always
believed.

I finished getting my hair fixed, then headed home to pack. I
talked to my brother and sister-in-law. My sister- in-law Nikki
calmed me. She told me after my mother was transferred to
ICU, she was okay. She was talking, breathing on her own,
and was in good spirits. She said the doctors were running
tests.

I arrived in Mississippi, and we headed straight to the
hospital. I saw my mom, my heart. She did not look well. Her
stomach was swollen. She seemed confused. I talked to her
nurse. The nurse had the mindset that it was the end for
my mom. I could not accept that. We stayed at the hospital
all day. My brother lived in Jackson, MS so I stayed there
versus going to my hometown (Brookhaven, MS) about forty-five
minutes away. So many people came to see her, and she
loved it. She always brightened up when she had company. I
was supposed to be home for two weeks, and then start my
new job.

My mom was in the hospital the whole time. I could not leave
and start my new life with my mom in the hospital. My job
understood, but I did have to return to go to a meeting. Mom
never got better. Her doctor kept bugging us to decide
whether we would resuscitate her in the event that she
stopped breathing, or her heart stopped. I was not at a point
that I wanted to let my mom go. My mom was going to live. That woman had “bet to”
stop messing with me. I could not do that.

She got to the point that she was stable, so they put her in a
regular room. I had so much to do. She had bills to be paid,
but now I had to be there with my mom. She could not feed
herself, but she ate. She got more confused. She knew me,
and was lucid, in and out. She always loved to tell stories. I
think she was telling stories at times when I did not know
what she was talking about.

The nurses and my mom’s doctor talked to my mother and
me about discharge. She was stable enough to leave the
hospital. However, she could not go home, and she did not
have long- term care insurance. Also she did not have much
money saved. I was overwhelmed. I had so much to do. The
social worker gave us the names of some nursing homes
that provided skilled nursing care- rehab. I thought we could
do that. Maybe she could get better that way. She had thirty
days of coverage from Medicare, because she had been in
the hospital. Meaning that she could stay at a nursing home
for thirty days without payment, due to her Medicare
insurance coverage.

So we picked out a nursing home that she had been to once
before after a hospital stay. The nurses were nice there. I
went to her home, and I found the flowers that I had sent her
for her birthday. She got sick the day they came. She could
not even put them in a vase. They were dead now. I could
not take it. I broke down and cried. Was this symbolic of what
was to come with my mom?

I then went to the Medicaid office; we had to have a plan if
she was in nursing home longer than thirty days. I had to
pray and encourage myself. I had to do this for her, because
of all of the things that she had done for me. Not to mention,
she was my heart. They gave me some paperwork to fill out.
I thought this is going to be fine. However, every day she
was getting more and more confused. She had incoherent
speech. She slept most of the time. She had no appetite.

When I tried to feed her, she fussed, which made me smile.
It was proof that she was still there. I still had some hope.
She occasionally was her usual self, especially with company.
I never will forget the day she died. It was September 27th,
2008. I went to the nursing home that morning. My original
plan was to run around and take care of some business, but
something told me to go see my mom. She was sleepier, more
than usual. She had labored breathing. Everyone seemed to be
calling me from all over: her sisters from out of town, and then
a mass of people came to the nursing home. Her nurse began
to talk about the final hours of life. Did they know something
that I did not? She was going to live; I could not listen to that
nonsense. I tried to feed her. She would not swallow, she would
aspirate. I stopped, and just sat by her while everyone talked.

Then it happened… she stopped breathing. I knew she was
gone. I walked out of the room to get her nurse and tell her that
she stopped breathing. She came in, and it was done. She had
passed. My mom was gone. I could not believe it. Why wasn’t
she healed? Why did my heart go away? I wanted to spoil her
like she spoiled me. I had a real job. I wanted to thank her for all
she did for me to make me the woman I was. I could not now,
because she was gone. What made it real was her funeral. I
went to grab her hand in the coffin, and it was cold and blue.
She really was gone.

I finally went back to my home in Philadelphia, Pennsylvania,
after staying in Mississippi for about two months. I needed
time to take care of my mother’s affairs. It was lonely back in
Philadelphia for the first time. I had loved it there before. I
am from a small town, but I love big cities. There is always so
much to do. I always meet new and interesting people. I
always had something to do. I now realized I did not have
that many close friends. I had acquaintances. I was lonely; I
needed true friends, I needed family. I did not want to be
alone. I got depressed. I did not want to go to happy hours,
movies, or social events, which was unusual for me. Work
was good because it distracted me from my low state. I
turned to food and lounging at home. I would stare out the
window, look at the river, and cry.

Why was my mom gone?

I wanted my brother, my father, my best friend there with me.
I had no desire to go out. My giggle, my smile were gone. As
a result of all of the eating and lounging, I gained weight. I
got up to 171 pounds. This made me more depressed. I
thought of myself as a fat slob. I missed the old happy
Ouida.

Speaking for myself, I found this snippet really sad. It reminded me of losing my mom to Lupus. I was in such denial that I rang her mobile phone every single day hoping she would pick up and say it was April fool in March. What did you think of it? This snippet was provided by the author. You can buy a copy of the book on Amazon